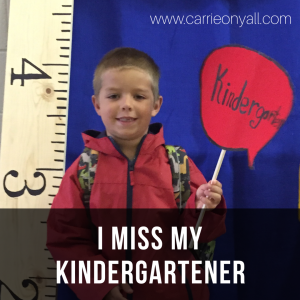 Over the past two years, I have made a nice little social media/online niche for myself documenting my awkward navigation of stay-at-home motherhood. For all the internet to see, I’ve laughed, cried, and written as a form of therapy while my boys destroyed our house, broke toys, swung from curtains still hanging on their rods (think Indiana Jones), and spilled food and drinks all over every available surface. It’s like they took some online course in Advanced Mischief for Boys right when we began this adventure together. Is that a thing? If it’s not…TRADEMARK and PATENT. I called it.

This past week, everything changed. Instead of dropping one kid at the elementary school, I dropped two of my children there. Tate is five years old and was the most ready kid in the world for kindergarten. He is funny, smart, kind, handsome, and oh-so creative. Tate plays like Andy from Toy Story with a little bit of Doogie Howser genius and some WWE moves on our littlest Sawyer who thinks Tate is the most amazing thing since Shark Week. I miss my kindergartener. 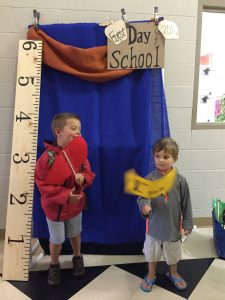 Tate was ready, and I firmly believed I was, too. I made jokes and memes to prepare for my day of celebration. One of my friends took my smiling picture in front of the back-to-school photo booth. And then he was gone, walking down the hall in his backpack, sitting a little shyly with his new classmates and playing with blocks his teacher had available during the long first-day drop-off.

I left my boy in his classroom and began the lonely trek to my car, to my new life as the stay-at-home-mother of just one kid. I held 3yo Sawyer’s hand and wondered what we would possibly do for the next seven hours. I buckled Sawyer in and saw Tate’s empty seat in the back…and I lost it.

I didn’t see it coming. I had been down this road before, dropping Sarah, now a tall, beautiful 4th grader, in her classroom when she was 5. Back then, I raced to my own classroom to meet my new students, and my busyness alleviated any nervousness about leaving her. This was different. 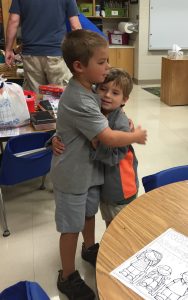 Sawyer didn’t like my tears. He said, “You left Tate, Mama. We need to go back and get him. I miss him!” In that moment, I totally agreed. I wanted to run back to the front office and tell them I’d made a mistake, that we weren’t ready after all. But I didn’t.

It has now been a week. Each day, Tate has exited my car in the drop-off line, told me he loves me, and promised to be a good boy and learn everything he can. For five days, I’ve watched the clock, wondered what he’s doing, hoped he raised his hand for the potty in enough time, and prayed that he’s made friends. His teacher asked why I ever warned her about my strong-willed boy because Tate has been nothing less than perfect so far. Thank goodness.

This is the new normal. Sawyer and I will get used to it. We’ve both been set adrift, wondering how to navigate this stage, missing our Third Amigo. Sawyer has been needy, and he’s informed me I’m a poor substitute for Tate.

“I want to go to kindergarten, too, Mama! I want to be with Tate!” he asked me all week. I’m not as fun as Tate, and I don’t know where all the good toys are hidden. Tate knows which toys are bad guys and good guys, and he apparently has a stash of granola bars hidden somewhere that Sawyer can’t find. I haven’t found the stash yet either.

Like Sawyer, I’ve also wished for Tate a thousand times. When I’ve read something funny or heard a joke on TV, Tate is the first kid I want to tell. I miss his stray apple cores lying all over the house and the genius engineering marvels he creates…a zip line for his dinosaurs, for example. It’s a little lonely with just Sawyer and me at home by ourselves, but we’ll find our rhythm. 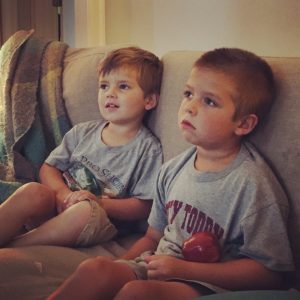 Finally, I’ve worried…have I done a good enough job with him? Does he know how much I miss him, even though I’m so happy for him? Does he know I’m amazed by him daily? That I think he’s one of the smartest humans I’ve ever met (not just among kids, but of all people)?  Will he look back on my blog posts and think I labeled him with too much mischief and not enough as the unbelievable young man he is? Did I wish away my time with him?

Yes, there were days I wanted time to hurry up. Kindergarten was off in the distance, a faint mirage in the desert, and it felt like we’d never arrive. Now he’s there, and our long days together won’t come again, not like they were. Everything changed, as it should.

I will get used to the new routine, and all will be fine. Sawyer and I will have a blast, Tate will start a kindergarten gang, and I’ll be called to the office eventually. I’m okay with that. But for now, I miss my kindergartener.