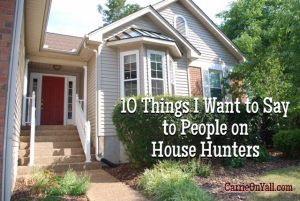 My husband and I love HGTV. We sit around at night after the kids have gone to bed, drink a few beers, and make snarky comments about the unendingly picky, weird people HGTV finds to be on its flagship program House Hunters.

Honestly, these people aren’t all bad, but we have invented a House Hunters Drinking Game if you’d ever like to play along with us. However, I also have a few things to say to those couples who choose their homes on national television.

Anything drive you crazy about House Hunters? I’d love to hear it!