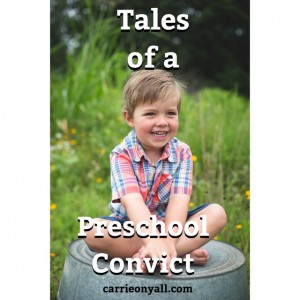 I am the worst mother in the world. Tate no longer loves me. He wishes I would go away on a green dinosaur and never come back.

I know, you’re wondering what could possibly cause such a drastic reaction in such a usually good kid. Well, I wouldn’t let him have a Capri Sun with his breakfast. This is, like, Old Testament punishment for my poor unloved kid, right? My friend Rich made this awesome meme just for me. 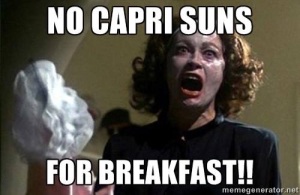 Terrifying, right? They’d better not ask for chocolate milk next, ya hear what I’m sayin’?

I think I should put everything I yell into photos of Joan Crawford. Anyway, it is this culture of extreme deprivation and abuse in which poor Tate lives every single day. Please feel free to play the world’s smallest violin and roll your eyes.

So…Friday. As the world’s worst mother, I did indeed forget that it was pajama day at his school, and so poor Tate was relegated to wearing non-pajama play clothes all. day. long. Of course, I was the only crappy mother who forgot…

Let me digress here as I mention that the pajamas-to-school thing is cute in the morning, but when you pick them up to go home, it’s just…weird. Pajamas look strange at 3pm in the school pick up line. AND…you get to see some true colors of your child’s classmates: Fiona loves Justin Bieber, Sebastian is really into the Ninja Turtles, and Arabella’s mom somehow found Taylor Swift/Selena Gomez jammies…

So I arrived to pick Tate up on Friday, but he wasn’t in his classroom. All his pajama-ed classmates turned to look at me as the classroom aide (they had a substitute teacher that day) stage-whispered: “He’s in the ooooffffffiiiicccccceee.” (I kid you not, it took her, like, four seconds to say the word “office.” Very melodramatic.)

Me: “Is he okay? Is he hurt? I forgot his pajamas this morning, so he was probably upset about that.”

Aide: “Weeelllllllll…he had some trouble listening after he got into an argument with one of his friends.”

Me: “Well, that’s par for the course for Tate.”

Aide: “Does Tate hear his name at home?”

Aide: “Does he hear his name? He doesn’t seem to be hearing it when we give him directions here at school.”

Me: “Weeellll, his hearing is just fine, and yes, he hears his name about 8800 times per day. That’s good old-fashioned stubbornness. It infuriates me…”

Aide: “Here is his stuff. See? He painted a green dog today. Don’t worry. He’ll have a better day on Monday.”

Well, she clearly hasn’t been around Tate long enough or he has been hiding his true colors from the teacher. This kid is the toughest combination: he is smart, adorably handsome, and oh, so infuriatingly insistent that he do things his own way on his own timeline. I have actually watched him decide to do things his own way and accept the consequences rather than do what I ask. Scary, right? He’s only four.

I’m not sure if we shouldn’t just skip kindergarten and go straight to juvie. 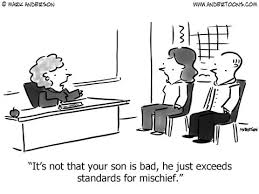 I make my way to the office where Tate is sitting with the director of his school. He is in the time-out chair and is doing the uncontrollable sniff thing because he is coming down from a fit of Biblical proportions. The Director is kind…she isn’t yelling, she isn’t coming up with ways to further punish him, and she is learning Tate’s side of the story in stilted, sniff-riddled pieces…

And even though I wanted to come in and yell at him for getting sent to the office, I just…couldn’t. He looked so pitiful and scared and sorry… What’s that?!? Contrition? This is certainly new.

Friends, I certainly didn’t let him get away with this. I assured the Director Jeff and I would talk about Tate’s behavior with him at home and he would come back on Monday with an apology and a brand new attitude, which he did.

And then Jeff and I discussed whose genetics prompted this behavior, how we will deal with this the next time he goes to the office (because we’re pretty sure this won’t be the only time it ever happens), and which of us Tate will trust to call and come get him from the police station someday because, yep, let’s face it, that will probably happen, too.