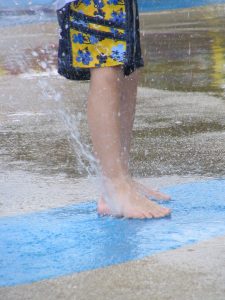 You are a bad mother. She didn’t say it in so many words. It was the way she looked at me after she caught me in a moment of parental weakness…accusatory, disgusted, disbelieving that she could be in the presence of such a deadbeat parent.

I poke fun at my own parenting skills (or lack thereof) all the time, and because parenthood requires a healthy sense of humor, we should all crack parenting jokes. I expect everyone to laugh with me, at me, whatever, but at the heart of the matter, we all know that I’m a good mom. Right?

But another human being, a stranger, looked at me like I suck at my job of being a mother, and I haven’t been able to shake that awful feeling.

We were at our community pool, and I have three kids, ages 8, 4, and 2, to prevent from drowning, dehydrating, and burning to a crisp in the summer sun. My two young boys don’t really swim, and I keep a constant watch on them. We had lunch at a picnic table, and my children scattered as I checked my phone to return a few text messages.

My boys went straight for the baby pool, and I will probably invite more bad mom vibes because, when I saw where they had gone, I didn’t immediately rush to the side of the 6-inch-deep baby pool to supervise them. Their nightly baths are deeper than this baby pool, and while I was returning messages, I looked up constantly (because…parenting boys), but I knew they were just fine. I was watching, but I wasn’t right next to them.

A very angry pool employee came out of the ticket gate to lay into my boys for playing too roughly and asked where their mother was. Immediately scared and chastised, they pointed to me, staring down at my phone for a few stolen moments. She approached me, fire in her eyes.

That boy is too big to be in the baby pool! Can’t you read the sign? It says 3, and he’s obviously older than 3! He’s playing too rough! And your littlest is way too young to be in there by himself! You have to be in there with him, isn’t that obvious? She carried on, but I couldn’t hear her…the blood was roaring in my ears, anger and shame roiling in my stomach. The look she gave me…it was so condescending, so irritatingly superior as she returned to her air-conditioned booth to reign on high as queen of the community pool.

Tears stung my eyes behind thankfully large-framed sunglasses. I hustled the boys over to our lounge chair and reapplied 100SPF sunscreen to my kids. My public shaming had attracted attention, and my 8-year-old daughter returned to ask what had gone wrong. We jumped back in the main pool, but the joy of swimming was gone for the day. We left twenty minutes later.

I always come up with what I should’ve said way too late. I rerun the conversation in my head, wishing I could go back to that moment and say the right thing, defend myself, explain in crisp detail why the other person is wrong.

When I recreate this scene in my mind, I tell the grumpy pool employee that while she caught me in an imperfect parenting moment, my children were not in danger. I tell her that I respect her need to enforce the rules. I’m a rule-follower (most of the time), and I want my children to see me following and enforcing rules, even if they aren’t mine, even when I don’t 100% agree with them.

Though it’s irrelevant to the situation, I insist that the sanctimonious pool employee know that I’m a good mom. I’m not a perfect mom, but who among us is a perfect anything?

I want to tell her that yesterday, instead of coming to the pool, we stayed home and made crafts for our grandparents who would soon visit. The kids helped me make a casserole, and we rode bikes in our neighborhood. Yes, I yelled at them when they wouldn’t stop fighting, but I also calmed down and explained my frustration, which they understood.

My kids play with each other. We read books. We draw all the time and learn all the things kids learn. I take them for frozen yogurt and kiss their boo-boo’s. They have chores and rewards for good behavior. They’re punished when it’s appropriate.

That pool chick can take a sliver of my eight years of motherhood, a brief incident at a community pool in the middle of a hot summer day, and use that to write me off as a shitty mother. That’s fine.