Every time a t-ball practice is cancelled, the coach gets his wings. Yesterday afternoon, I received the BEST group text ever. 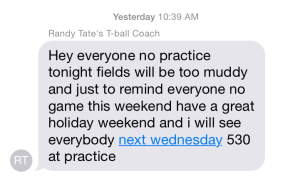 No practice tonight and NO GAME on Saturday morning? This is my kinda team! Can I tell you how happy things like this make me? Just…giddy, if we’re being completely honest about it. I will not pause to evaluate why we sign up for all these extracurricular activities when my 4yo Tate spends most of his time on the t-ball field with his hand down his pants rather than in his glove, but…what-ev.

We’ve all heard stories about horrible parents at the ball field, and by comparison this incident is quite mild…but still… I was literally the only person who heard it, but it has bothered me ever since.

I was sheep-dog-herding my two boys at my 7yo daughter Sarah’s softball game. I can’t sit in the stands with the boys…they’re too annoying to people around them, and they’re easier if they have some room to play.

A few weeks ago, I sat on a low brick wall behind the plate next to a mother whom I didn’t know, and we had a nice but brief chat about how hard it is to take little kids to the ball field, watch out for them, and still manage to watch your kid on the field. After our exchange, we sat in amiable silence, watching the game, my head turning like a submarine periscope to make sure the boys weren’t being too rowdy or trying to go home with strangers.

And then I heard it. The mom sitting next to me said, Drop it.

Drop it, drop it, DROP IT! She said it urgently, gaining momentum as she repeated, but certainly not very loud. I’m sure I was the only person who heard her. A kid on her daughter’s team had hit a grounder and was running to first base. A kid on Sarah’s team fielded the ball and threw the runner out at first base. To the chorus of this mother hoping an 8yo little first baseman would drop the ball so the runner on her daughter’s team would be safe.

Really?!? the word came out so quickly that I had no idea I’d even spoken it out loud. My “really” was no louder than her tacky comment, but I’m sure there was no doubt it was aimed at her. She stood up, huffed away, and proceeded to middle-school-whisper to another mom behind her hand while giving me dirty looks. Maturity levels were skyrocketing at that point.

But really…can we please not cheer for 7 and 8yo little girls to fail? Doesn’t that seem way harsh for girls who were probably picking daisies on the t-ball field only two or three years ago?

Since then, I have had time to gather my thoughts on this subject, and I have laid them out here, advice for both myself and Drop-It-Mom (DIM).

Sarah had another game tonight, and her team didn’t win. I don’t know if this was the team DIM’s daughter is on or not, and I really didn’t care. I watched Sarah run to the concession stand for her popcorn, a beautiful smile on her face just to have played this evening. I asked her if she had fun, and she said it was one of the most awesome plays of her life when she dove for (and missed) a ground ball late in the game. If DIM was in the other stands, I hope she was happy that my precious daughter missed that ball. I didn’t care either way.