Despite my Sunday learning,
Towards the bad, I kept turning.
‘Til Mama couldn’t hold me anymore.

And I turned twenty-one in prison doing life without parole.
No one could steer me right but Mama tried, Mama tried.
Mama tried to raise me better, but her pleading, I denied.
That leaves only me to blame ’cause Mama tried.

You’re only four and a half years old, and already you’re a force to be reckoned with. You are super-smart. You’re as sweet as they come when you want to be. And being your mama, while it is the best job of my life, is probably the greatest challenge I’ve ever faced. 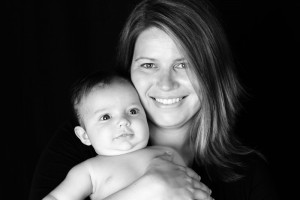 You and me in the beginning, kid.

When your sister was three, I bought a copy of The Strong-Willed Child because she had a bad week. A bad…week. Six days of defiance and on the seventh day she rested, never to be much of a problem again. I remember looking over at you, six months old and cooing happily in your bouncy chair, and thinking, You’ll never act like this, right? In hindsight, I look at her brief rebellion as child’s play compared to the gangsta lifestyle you’ve been living ever since. 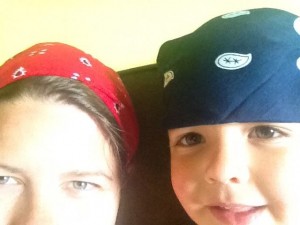 When dress up goes horribly wrong, yet strangely appropriate

Believe me, I’m not writing you off at four years old as someone who will eventually turn twenty-one in prison like Merle Haggard…I bet you’ll have figured out how to break out of prison long before then. Okay kidding. (I think.)

The things that make you tough today will serve you well in adulthood. No one will ever run over you…you’re stubborn, you speak your mind, and you don’t falter once you’ve made a decision. For years, you’ve chosen to accept the consequences of your actions rather than admit defeat. That’s pretty hard core, kiddo, especially for someone who was still in a diaper. I admire you for that, but it’s also caused me to check for gray hair in the mirror (when I actually get the chance to look in a mirror…I can’t leave you alone for long). 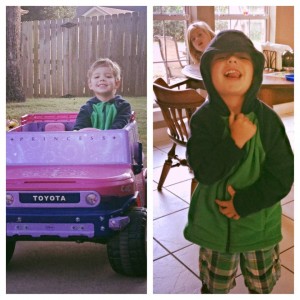 Yes, you can even be gangsta in a pink jeep or plaid pants.

Son, raising you is not for the faint of heart. Your daddy and I have developed a tag-team relationship in which we “tap out” when you’ve worn one parent down so much that you need a fresh adversary. Sometimes I tap out when my ultra-frustrated inner monologue feels dangerously close to spewing out of my mouth. You don’t need to be the kid who talks like my inner monologue at your Christian preschool. 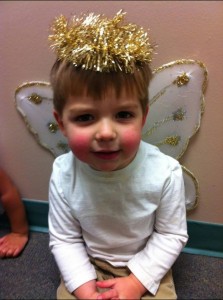 This picture has brought me to laughing tears before because, well, an angel? Surely you jest, Christian preschool.

Speaking of Christian preschool, you’ve been sent to the principal’s office already. Twice. Both times involved fighting with another kid for a toy, and the first toy you fought over was imaginary…let’s take a moment to contemplate that one…. I’m not sure what this says about your future dealings in kindergarten or with local law enforcement. I’m already making donations to the police department in your name, just to be safe. 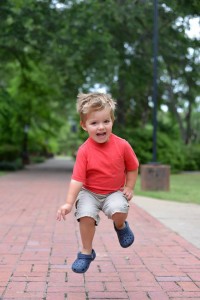 You would also be a helluva poker player. You have called nearly every bluff I’ve ever laid forth, and when I actually have to follow through with my threats of WE’RE LEAVING and NO TV, let’s face it…you’ve still won because it’s punishment for me, too. I don’t want to leave. I don’t want to fight you about the TV, and true to form, you know exactly which misery buttons to push to ensure maximum-mom-punishment for enacting consequences. Thanks, buddy. 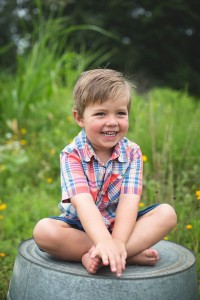 In short, you’re tough, but lucky for you, Daddy and I are tougher. You are so worth every ounce of love and discipline we pour into you. Your spirit, your terrible knock-knock jokes, your adorable unintelligible letters to Santa that you began writing in September, your sweet, slight lisp as you ask me to read another “thtory” before bed… 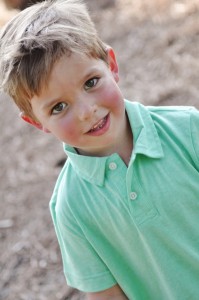 I’m not gonna lie…sometimes these days seem like they will never end. But, precious son, we will outlast you, we will love you endlessly and proudly, we’ll keep teaching you right from wrong, we’ll love your strong spirit (but not allow you to be a terrorist or a brat), and we’ll continue to raise you the best way we can. And you’d better not have any birthdays in prison.