You know the Mother’s Day when you get the sleeping late, the spa pedicure, the cut flowers, the showering of gifts, gift cards, and the afternoon nap? I got some (not all) of it. But I totally loved my Mother’s Day, complete with its dose of sweetness, reality, humor, and murder. Yes, MURDER.

Sweetness: Breakfast in bed! Coffee, milk, and cinnamon rolls from the pop-open can that my daughter baked herself. She was so proud as she tottered in, fully dressed for church holding the tray. Adorable, appreciated, and I wish I could wake up like that more often.

Reality: 2yo Sawyer had to be excised from the lunch table for excessive, inexplicable crying. Jeff bought me a steam mop for Mother’s Day, a nod to my hatred of all things cleaning but a Prince Charming-esque valiant attempt to alleviate my hate/hate relationship with my white tile floor. 4yo Tate peed in his pants while on the couch but swore it was his younger brother, and he and Sarah almost got into a fistfight about who had actually urinated more in his pants, Tate or Sawyer. (Magical.)

Humor: The kids got in trouble with Jeff for saying “What the what?” Yes, there have been a few slip-ups and bad parenting moments lately wherein the kids may have overheard me use language I’d rather they not repeat. So I’ve replaced my usual under-my-breath-mutterings with “What the what?” ….What?!? It’s way better than other things they could hear me say. As it is Mother’s Day, I pled the Fifth and let Jeff referee that one. And secretly giggled...

Murder: We wanted to get a few pics of the kids and me outside on our front porch. It seemed to be going well (except for my unfailing ability to look weird in pictures, squint at the camera, smile too much, smile too little, and hold my body at awkward angles so that I actually appear at least 40 pounds heavier than I actually am, etc…we found this all out later upon closer photo inspection).

It was going well until Sarah let out a bloodcurdling scream, followed by the loudly flapping wings of eight birds, also screaming and mad.

Followed by our golden retriever Lexi emerging from the bushes with a baby bird coming out of her mouth.

Our screams startled Lexi, who dropped the bird and picked up it several times. Each time she dropped it, the bird would attempt escape, Jeff would grab Lexi’s collar, Lexi would wiggle out of his grasp, and the kids would yell, “NOOOOOOOO!!!!!” It was a macabre display, and we hustled the kids back in the house before we were attacked by an angry mob of birds. 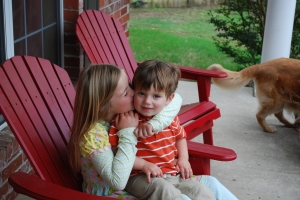 Crime Scene Photo. Don’t be fooled by the adorable kids. Note the photo-bombing dog going off the front porch. Something is about to go very, very wrong.

Has it been a perfect day? Almost. I could’ve done without peed pants, screaming toddlers, unflattering pictures of me, and bird murder (bird-er! Lexi is a birderer!..sorry. Couldn’t help myself.) But…it’s just another day in paradise. Not sarcastic paradise. Real paradise. Motherhood is an awesome gig.