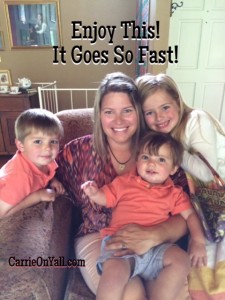 Honest Disclosure: This essay was meant to be read aloud. I recently submitted it for a live show, but it wasn’t chosen. But here it is for you, the people who HAVE to love me.

Ten years ago, as my husband and I piled into the back seat of a rented limo and were whisked away from our wedding to live happily ever after…my mother-in-law cried. We aren’t talking a single trickling tear of happiness and pride. We’re talking full-blown, body-convulsing, four-tissues-required sobs. Handkerchiefs appeared, hugs were distributed, and people consoled her like this was a funeral and not a wedding.

The day had been perfect, yet I was a bit offended…I wasn’t taking her baby boy away. He was nearly thirty! And she was gaining me!

When I became a mother myself to the most angelic baby girl on the planet, I began to scratch the surface of the intense, beautiful, heartbreaking joy of motherhood.

Today, as our blonde-haired, blue-eyed angel is finishing third grade and her two mischievous younger brothers flooded our house three weeks before Christmas, I see motherhood as a series of stages, some harder than others, some that burst your heart wide open with love, some that give you gray hairs that you don’t have time to pluck because you’re chasing after the next disaster in your home.

My children are eight, five, and almost three years old. As of today, I have changed multiple diapers per day for 3,219 days, or almost nine consecutive years. I have wiped a gazillion noses, said “yes” and “no” and “use your manners” and “please be careful” and “don’t break that” and “sleep tight” and “I love you” about eleven million times.

Though it feels endless, I know this stage is temporary. If I had a dollar for every woman who stopped me in the grocery store and said, “Enjoy this. It goes so fast!”… I probably would’ve taken the kids to Disney World by now. These women mean well, and they speak the truth, even when I’ve been tempted to ask if they’d like to babysit and relive the glory days while I finish my grocery list.

And then, as quickly as they arrived, these early stages go away. They aren’t babies anymore. There aren’t diapers. We can go to the store and behave. Everyone puts on a backpack and goes off to school. Someday I’ll wish I had enjoyed these stages more instead of rolling my eyes and wishing my kids were bigger…

When I picked my five-year-old son up from his preschool the other day, I stayed to talk to a few moms and let him run a little longer on the playground. I saw him pick two dandelions from the grass, one of which he immediately brought to me to wear behind my ear. “You look pretty, mom!” he called as he dashed away, the second dandelion still clutched in his hand.

A little girl was standing at the top of the slide, and she was smiling, her hair blowing in the wind. I watched my son run up the slide to the top, an action which he knew was against the rules, and present the scraggly flower to the little girl. She gave him a look of pure joy and admiration at his romantic gesture, a look that seemed to say, “Wow, maybe boys aren’t so gross after all.” She sniffed the dandelion and gazed after my son as he ran off to join a different game with the boys.

Honestly, I’ve never once in ten years asked my mother-in-law about her sobbing as we drove away in our wedding limo, and after watching the five-year-old flirtation …I don’t need to.

I’m not sure when my diaper-changing streak will end. I’m not sure when the tween years will sneak up on us and I will become less important than my kids’ friends. I’m not sure when my kindergarten Casanova will understand that his sweet gesture might make girls develop crushes on him. I know the time will come when their hearts will be broken, they will feel the stings of peer pressure, or the world will just be unfair.

I’m not sure that I, as their mother, am ready for all these stages, but they will inevitably come. For now, I will take the age-old advice of women in grocery stores everywhere: I’ll “Enjoy this. It goes so fast!” I’ll change diapers until I don’t have to, I’ll put dandelions behind my ear, I’ll love my three kids with every fiber of my being. And I will most definitely shed a tear or two as they drive away from their weddings.